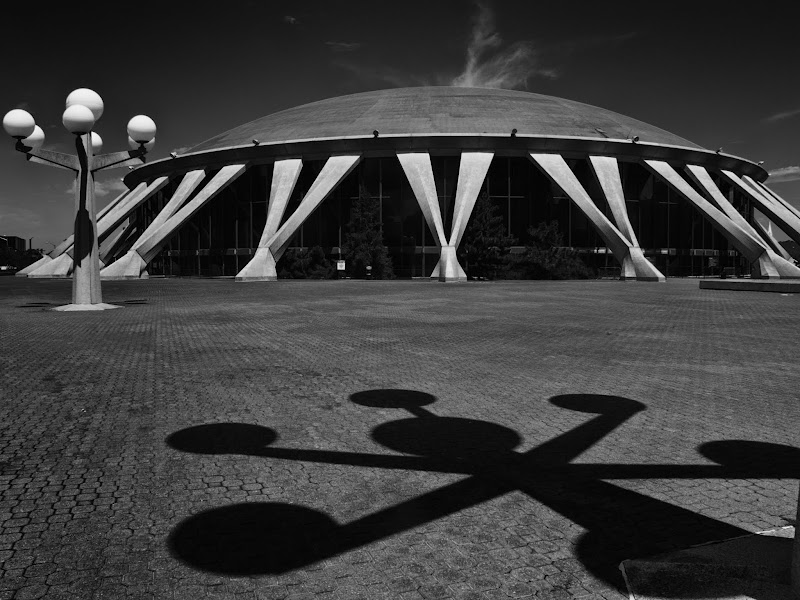 The Scope Plaza in Norfolk Virginia leads up to the world's largest concrete dome, which was designed by Italian architect/engineer Pier Luigi Nervi in conjunction with the Norfolk firm of Williams and Tazewell. The venue holds a bit of a political past. According to Wikipedia - After watching the 1960 Rome Olympics on television, Brad Tazewell and Jim Williams, the Norfolk architects who were eventually to partner with Nervi, solicited U.S. Sen. A. Willis Robertson, father of Christian Broadcasting Network founder and former candidate for President Pat Robertson, to build a sports complex in Norfolk. Subsequently, President Lyndon B. Johnson asked Robertson to support federal funding for a multimillion-dollar cultural center in Colorado and Robertson said he would if Johnson would support one in Norfolk. Scope was completed in 1971 at a cost of $35 million dollars with the federal government providing $23 million, almost 66% of the total cost. Canon G11, 1/250sec @ f/8.0, ISO 100, converted to black and white using Silver Efex Pro 2 and Lightroom 4.
at 9:47:00 PM
Email ThisBlogThis!Share to TwitterShare to FacebookShare to Pinterest
Labels: Architecture, Arena, Black and White, Canon G11, Norfolk