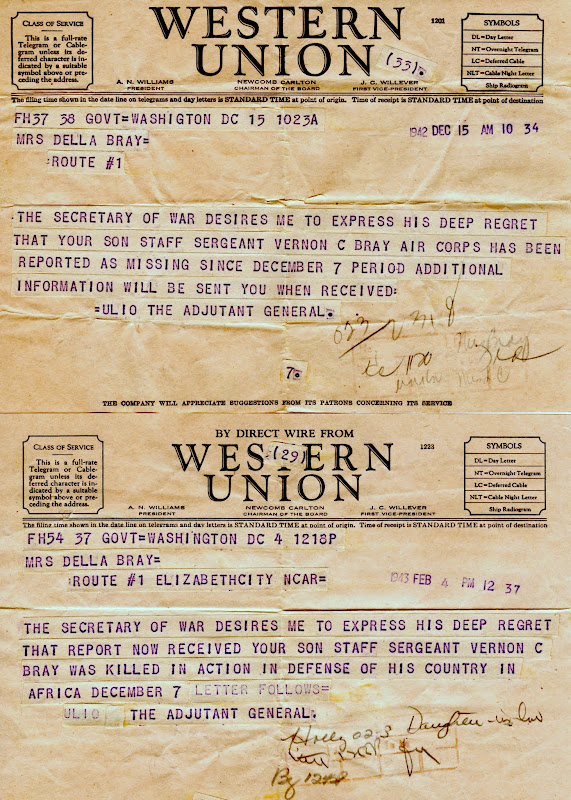 - Since it was Memorial Day I thought I'd share some memories from Cindy's family during WW II. Cindy's great grandmother Della Bray recieved these two War Department telegrams about her youngest child, SSgt. Vernon C. Bray who was serving in the US Army Air Corps, 93rd Bombardment Group, 330th Squadron.

On December 7, 1942 his squadron along with the 328th and 409th squadrons left their base at Alconbury, England on a long flight that would end at Tafarouri Aerodrome, a former French airfield outside Oran in Algeria. The 93rd was sent for temporay duty to supplement the newly formed Twelfth Air Force, which had been recently activated in North Africa under the command of General James "Jimmy" Doolittle. Vernon's crew flying a B-24D Liberator named the Blastin' Bastard was lost when their airplane crashed into a mountain while attempting to land at Tafaroui. Personnel at the base had not been alerted that the B-24s were coming in and no plans had been made to light up the runway. Gasoline flares were then lit and the rest of the group landed safely on the muddy airfield.

Thank-you for sharing this.

My uncle Sgt. Kenneth Ralph Pastrof died in the same crash. Hard to believe it was so long ago. guy_kern@comcast.net