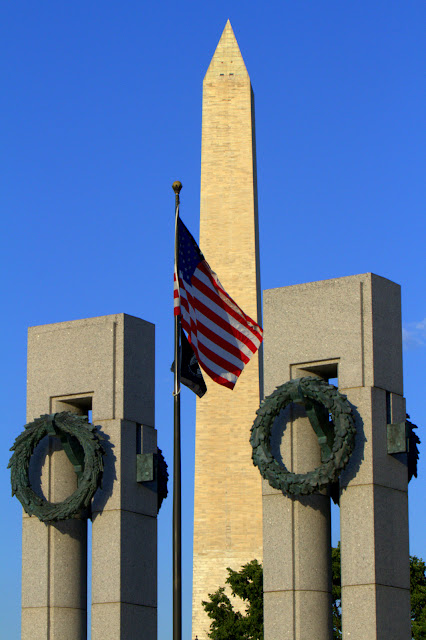 - Sixty-seven years ago today my father's unit, Company C of the 13th Infantry Regiment, 8th Infantry Division, United Sate Army went ashore at Normandy France to take part in the invasion of Europe during WWII. My father was 17 years old at the time and would celebrate his 18th birthday five weeks later on August 15th near Rennes France after fighting through the hedgerows. By the following Spring he was a hardened combat veteran wounded five times and earning two Bronze Stars. He fought through the longest single battle in U S Army history in the Hürtgen Forest between Belgium and Germany. This photo of the Washington Monument taken from the Wold War II Memorial is dedicated SFC Edward H. Sullivan, a member of the "Greatest Generation". Canon 7D, 1/800 sec @ f/11.0, ISO 400, 70mm focal length.
at 8:48:00 PM
Email ThisBlogThis!Share to TwitterShare to FacebookShare to Pinterest
Labels: Canon 7D, Flag, Memorial, Washington DC

My Mentor, John Pappas also served in "H company, 13th INF, 8th DIV" from Ireland to berlin.
He may well have met your father, as he also fought in the hurtgen and St Lo.
we owe so much to them for there service.
V/r

Thanks Patrick for commenting. John and my Dad were men who bravely fought for our freedom. Thanks for your service. David