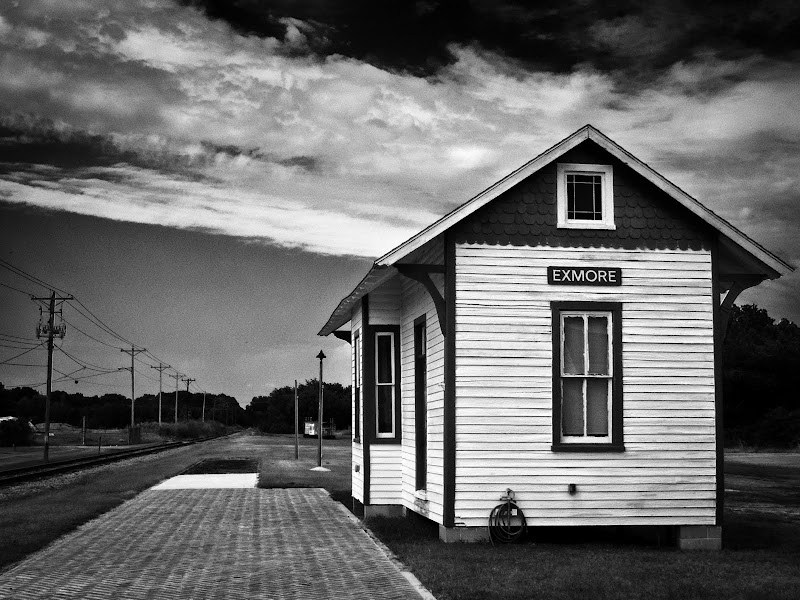 - Stopped in Exmore on the way back down the Eastern Shore of Virginia today. Exmore was named after the number of railroad stops left until reaching the Delaware state line, there were 10 more stops, thus "X-More." The tracks are now part of the Bay Coast Railroad but were originally built by New York, Pennsylvania and Norfolk Railroad (NYP&N) aka the "Nip 'n N". Canon G11, 1/800 sec @ f/8.0, ISO 200, converted to black and white with Silver Efex Pro 2.
at 8:55:00 PM
Email ThisBlogThis!Share to TwitterShare to FacebookShare to Pinterest
Labels: Black and White, Canon G11, Eastern Shore, Trains

And here I am an ES native thinking it must have been named for some place in England. Thanks for the correction.

Les, there is debate about the origin of the name for Exmore. The story I used certainly went with my photo. The town could have also been named after Exmoor in England but since the town didn't appear until after the railroad was constructed the X-More seems more likely.

This is a great shot. It has a kind of "Twilight Zone" feeling- I'm inspired to write a cool, spooky story about this place!